ASMI is proud to announce that ASMI Account Executive Sue Prentiss was sworn in today for a second two-year term as State Senator for New Hampshire District 5. Originally elected for a term beginning in 2021, Sue was the prime sponsor of 11 bills and cosponsor of 120 bills in the last session. Seven of the 11 bills primarily sponsored were passed and signed by the Governor. At ASMI, Sue is the American Trauma Society executive director. 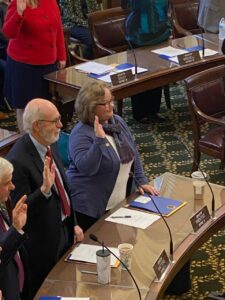