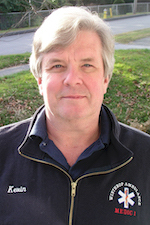 As program manager for the National Association of State EMS Officials (NASEMSO), Kevin assists NASEMSO officers and staff to plan, coordinate, and fulfill the organization’s project contracts program, to improve ongoing coordination with other national EMS agencies and organizations, and to assure that NASEMSO is effectively represented. He is the staff liaison for the Rural EMS Committee. He served as the state EMS director in Maine from 1986 through 1996, receiving the Maine EMS Board Governor’s Award from Governor Angus King in 1997. Since leaving state government, he has served as a consultant for government, hospital, and EMS provider clients, specializing in service evaluation and creative system building. Kevin is the communications technology advisor to five national EMS associations, and specializes in EMS system development in community paramedicine and rural EMS. In August 2015, Kevin was named by the U.S. Secretary of Commerce to a second three-year term on the First Responder Network Authority (FirstNet) Board. He was named by the Government Technology/ Solutions for State and Local Government magazine as one of its 2013 “Top 25 Doers, Dreamers & Drivers in Public-Sector Innovation.” Kevin has been with ASMI since 2000.